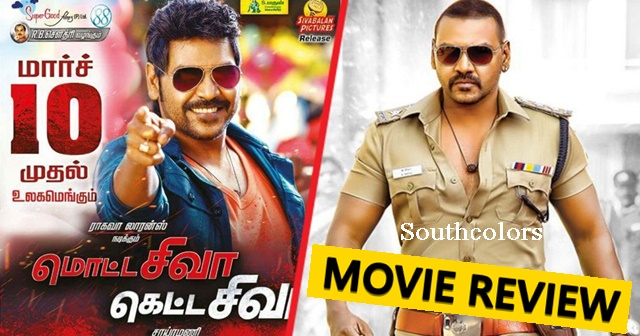 The film is the official remake of the 2015 Telugu super hit ‘Pataas’ with music by Amresh Ganesh, cinematography by Sarvesh Murari, editing by Praveen K. L. and produced by R. B. Choudary under the banner Super Good Films.

Motta Shiva Ketta Shiva movie story is about a corrupt cop played by Raghava Lawrence. An ugly incident from the past motivates him to be a dishonest cop, who works closely with a rouge politician enacted by Ashutosh Rana.
The story takes a twist when the cop and politician’s relationship sours. The remaining part of the story is about a cat-and-mouse game between Lawrence and Ashutosh Rana.
Motta Shiva Ketta Shiva Movie has evoked a lot of interest in the minds of the audience with its Mass action-packed trailer and teaser. With Raghava Lawrence being part of a couple of successful films in the recent years, the expectations from the film have soared sky-high.

Motta Shiva Ketta Shiva film is truly a Mass commercial entertainer. The first half is a regular entertainer with comedy and romance, but the interval bang is heart touching. From the second half is quite interesting. Raghava Lawrence has done justice to his role as police officer. His acting before and after the interval is impressive. This Film will be remembered for his performance forever.