The Quantico actress achieved another feat as she won the Maxim India hot 100 contest for the year 2018. This is the fourth time that Priyanka Chopra won the title. She has been declared as the hottest woman in the world in 2018 by the magazine on the basis of the public vote. Check out Priyanka Chopra Maxim India Hottest Cleavage Photoshoot 2018. 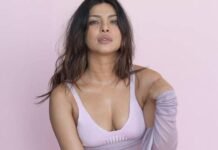