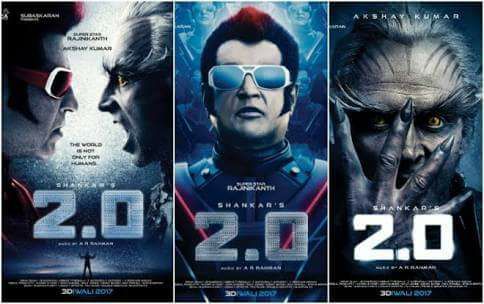 The Zee Network has bagged the satellite rights of superstar Rajinikanth’s “2.0”, which is being made in three languages, Tamil, Hindi, Telugu the makers announced on Monday.
“It’s true Lyca Productions gets a partner in Zee for our mega opus ‘2.0’ Satellite Rights,” Raju Mahalingam, COO of Lyca Productions, the producer of the film, tweeted.
According to industry sources, the deal was closed at a whopping Rs 110 crore.Being directed by S. Shankar, the film is a sequel to Rajinikanth’s 2010 blockbuster “Enthiran“.
The film marks the Tamil debut of Akshay Kumar in the role of an antagonist.Also starring Amy Jackson, Sudhanshu Pandey and Adil Hussain, the film’s music by A.R. Rahman.The Rs 450-crore film will simultaneously release in Tamil, Telugu and Hindi this Diwali.