After sharing a crackling chemistry in Ek Tha Tiger, Salman Khan and Katrina Kaif are ready to burn the screen with the sequel to the film Tiger Zinda Hai. A proof of that is the recent photo-shoot for Vogue’s December issue. If that wasn’t enough, the magazine has released a behind-the-scenes video of the Bollywood stars, which has now gone viral.

The video shows the different looks adopted by the stars for the different skills of the shoot. While for the cover, Katrina Kaif wore a $exy Fendi black georgette v-neck long dress, Salman Khan opted for a simple grey T-shirt with jeans. But what is unmissable in the video is the ease with which both actors pose together. We believe, it is this sizzling chemistry that has made the video a hit. 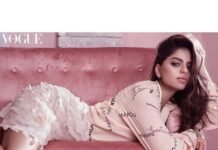