Mollywood superstar Mammootty upcoming project titled “Uncle Malayalam Movie Official Teaser” has been released on Tuesday. The 40 sec Uncle promo-video frames the film to the high expectations of the audience.

The Uncle Movie teaser reveal’s that the girl goes for a trip with her father’s friend who she call’s Uncle and she feels safe and comfortable with him, the drama say’s about the innocent relationship between them.

But at the last scene of the teaser, Mammootty dress up’s like a detective and light’s a cigar seems to be challenging suspense thriller flick. The Uncle film directed by Girish Damodar. After acting in many movies, Joy made his debut as a writer and director with Shutter in 2013. The film was well received and was screened at several film festivals. 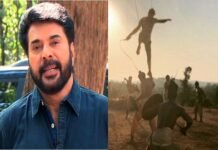