Yatra Movie teaser just dropped in and it is sure to give you goosebumps. Yatra, the biopic of late Chief Minister of Andhra Pradesh, YS Rajasekhar Reddy, is progressing at brisk pace in the direction of Anando Brahma fame Mahi V Raghav. Malayalam star Mammootty is playing the role of YSR in this upcoming much prestigious project Yatra. The teaser proves that Mammootty is fit in YSR’ role.

The Yatra Movie Teaser shows that how YSR’s Padayatra started. One of the highlights of 54 sec teaser is undoubtedly the background voice which says how YS gets determined to do Padayatra. Mix Mammotty’s gate up with K’s background score, you have something that is beyond explanation. It’s pure magic! Yatra is jointly bankrolled by Vijay Chilla and Shashi Devireddy under the banner of 70mm Entertainments banner. 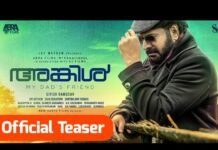