Ghazal singer Kesiraju Srinivas, fondly known as Ghazal Srinivas Arrested on Tuesday after a Radio Jockey alleged that he sexually harassed her. She used to work at Aalayavani 24/7 Telugu Web Radio. Kumari, who was working as program head in the web radio run by Srinivas, alleged that the singer harassed her sexually and mentally for a long time. The police have arrested him after finding validating evidence. ANI‏ tweeted, “Hyderabad: Singer Ghazal Srinivas arrested for allegedly sexually harassing a 30-year-old Radio Jockey.“

The singer had forced the woman to do body massage, the police said. He had insisted on her private pictures and threatened to remove her from the job if she failed to surrender to him, according to Mumbai Mirror. A case under Indian Penal Code sections 354 and 354A (making sexually colored remarks) and 509 (insulting the modesty of a woman) has been registered against Srinivas, said Vijay Kumar, the assistant police commissioner, Punjagutta, Hyderabad.

But Ghazal Srinivas has denied all the allegations made by Kumari. “I recently met with an accident. I had a ligament damage and calcium deposit on my shoulder. Every day a woman therapist comes and does the physiotherapy. When she did not turn up one day, this woman volunteered to help,” Mumbai Mirror quoted him as saying.

Ghazal Srinivas, 51, began his career as a school librarian and went on to become a popular Ghazal singer. He holds the Guinness World Record for singing Ghazals in multiple languages. In 2008, he sang songs in 76 languages in a single concert commemorating Mahatma Gandhi’s philosophies in the presence of the then-President Pratibha Patil. 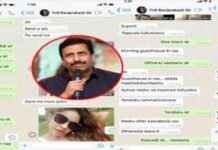