The YouTube has now removed Ram Gopal Varma’s God Sex and Truth Trailer (GST 2018) starring American adult star Mia Malkova. Recently the Scriptwriter P Jaya Kumar accused RGV of plagiarising his work. According to him, RGV had also sexually harassed him and many others.

P Jaya Kumar filed his complaint on 26th January 2018 and Youtube representative have responded today saying that RGV’s GST is removed. According to Varma, GST talks about sexuality from a woman’s perspective. It was shot with American adult star Mia Malkova and released on the digital platform on 27th January.

It has now emerged that ‘God, Sex and Truth’ was shot in Hyderabad city, not in a European city as Ram Gopal Varma has been claiming. According to a women activist, she has proofs that RGV has filmed the movie in a five-star hotel in Hyderabad. Filming adult movies is not legal in India.

On the other side, Women organizations from Visakhapatnam on Wednesday started a 48-hour hunger strike demanding the arrest of film director Ram Gopal Varma immediately for making derogatory comments against the city- based activist. 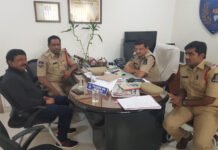