The filmmaker says the video is about a “revolutionary sexual philosophy” as professed by Mia Malkova and encapsulated by him. While God, Sex and Truth are just released on the internet on dedicated website www.godsextruth.online, but the site is not opening due to heavy traffic. Here few RGV and Mia Malkova private pictures from the film Set: 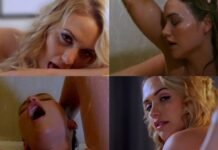